When I talk to companies and entrepreneurs, they are eager to launch their product idea to the market ASAP. They are convinced they have something lots of people want and would pay for. The thing is, these days, customers are inundated with products.

When a new product hits the market, the only way to differentiate it is by meeting a specific consumer need head-on. From the business perspective, you have to find that customer need (and develop a product to match it) in a cost-effective way.

A minimum viable product is what gets you there and the approach we follow at Making Sense is to create new products as well as define the first version of a modernized one.

A minimum viable product is the first bare minimum set of features to make something that lasts. If you’re trying to succeed in today’s competitive market, it’s one of the best investments you can make. Here’s why MVPs are essential for a successful product launch.

A little thing to validate a big idea

A minimum viable product is one that is functional enough to be put in the hands of real users. It is not fully developed — in fact, it lacks most (if not all) of the bells and whistles. The point is not to have all the features in place, but rather to get feedback from your customers so that you can later develop the right features, the ones people actually want and would pay for.

It’s also defined as a developmental technique in which a product is developed with sufficient features to satisfy early investors. Personally, I’ve been involved in both cases. We’ve created early versions of products in a pre-investment phase, in a very short amount of time and using tools such as InVision with the sole purpose of showcasing to investors and early potential customers.

But we’ve also helped companies after they’ve secured funding and need to start developing the solution. In this case, they need a clear roadmap to the first release. No matter the financial situation, our approach always starts with an MVP as the best way to spend the least amount of time and money, and get early feedback in order to iterate.

Three characteristics of an MVP

Every MVP is slightly different based on the needs of the product, time constraints, budget, etc. However, a successful MVP has three key characteristics:

You should not have more than the minimum — doing anything extra at this stage is a waste of effort. You’ll build those features later, once you know users’ preferences. At this stage, the idea is to build a product that can later be molded with all the features to match user preferences.

During our Discovery phase, we dedicate a significant part to understanding and prioritizing features based on our goals and success criteria, which may differ from project to project.

In fact, the product may be dramatically altered at a later point as feedback veers widely away from the original product.

The only catch with this technique is that you need a product that is complete enough for users, to then gain traction within your target market and for investors to see the early promise of the final product. This can get a bit tricky since your final product may widely diverge from the original. So, you have to strike a balance. Even so, this balancing act is a valuable learning process.

Why you need MVPs

When you’re excited about the idea of a product, it’s easy to want to dive into developing the whole product ASAP. MVPs ask you to optimize your resources and prioritize — and for good reason. Here are a few reasons why MVPs are so valuable. 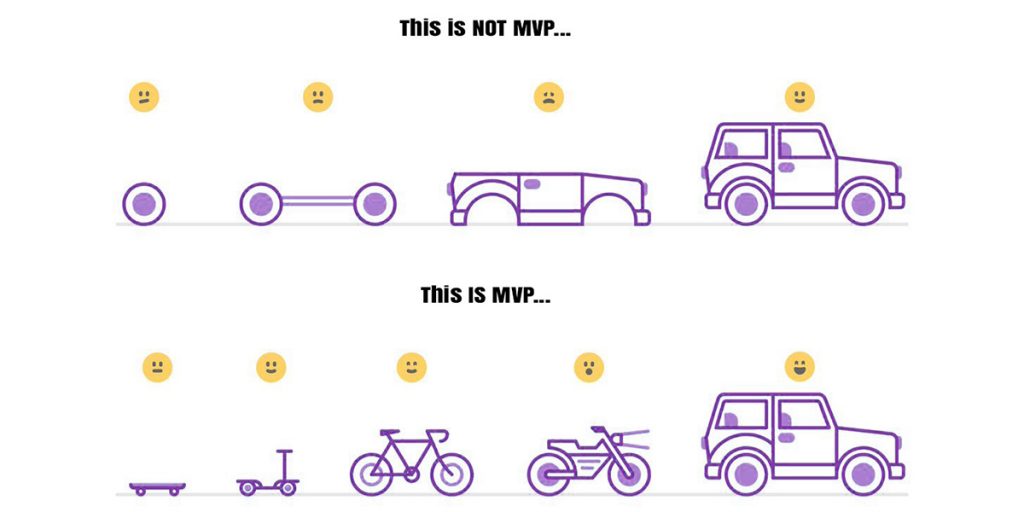 In other words, by developing an MVP, you have a golden opportunity to get your product market-tested for viability.

Perhaps the most important element of MVPs is that they give you the opportunity to get feedback on your product — well before the product competes in the market.

Getting feedback, and the right feedback as we’ve mentioned previously on this blog, is the most important part of developing any product. After all, feedback is the stage where users tell you what they actually want.

Then, you can use this feedback to create a product that is more aligned with their preferences. In doing so, you’re setting up your product to meet the needs of your desired audience — right from the start.

That’s why you should involve users as early as possible in the process. During the definition stage of this minimum viable product (the Discovery phase of our Development Framework), we ask our partners to include customer feedback.

We create specific workshops to get the least biased feedback possible from potential customers or current customers (if we are working on a modernization project). In this way, we don’t rely on what product managers or founders believe about what users want or how they would use the product.

Suppose you have a product. Not the whole product, just enough to show the foundations to investors, enough for them to see that they are solid. As more and more investors find the foundations viable, they will be scaled to the frame of a house and, eventually, become a complete house.

That’s what happened to AngelList, which had humble beginnings as a simple website for startups to reach out to investors and raise funds.

Having an MVP gives you a critical advantage: it allows you to generate early interest in a market-tested product. Because investors can see early interest, it proves to them that your product has an audience and is worth developing further. After all, they can see the makings of a product that’s likely to succeed.

Your MVP is the beginning of a stronger product. It may not be the exact product you end up with, but it gets you on the right track for success. This process makes the most sense: it helps you quickly validate your idea and minimize your costs regarding time and resources, instead of spending too much on an ill-conceived idea.

Our job is to help you find the right track and hit the ground running with your product.