In many industries, innovative startups have begun to pave the way for new technologies and advanced business strategies. These companies, while still embarking on their own journeys, have something to share with others in their sectors, as well as others in the enterprise industry as a whole.

Each year, these young, revolutionary startups gather at TechCrunch Disrupt, providing them a place to introduce their creative technologies and ideas. This year, I attended Disrupt 2015 in San Francisco, where I joined other members of the Making Sense team to present two of our flagship products, Doppler and Lander. The event had much to offer, including a very interesting Startup Battlefield competition, where I learned about a few promising organizations. The event also featured a Women in Tech panel recognizing diversity in the technology industry.

Today, I’ll share all my thoughts and insights, as well as what I took away from Disrupt 2015.

The event took place at an older, large pier, providing a very interesting stage for the event. While we had some unexpected hot weather while we were there, and the pier was not air conditioned, the overall setting was very different, and very cool.

Myself and the Making Sense team were situated within the Argentina Pavilion, along with several other Argentinean startups. Other pavilions at the event included Brazil, Uruguay and Taiwan. The event included a whole host of startups from a range of industry verticals, including health care, marketing and communications.

The VR solutions present at the booths captured my interest. I thought I would see innovative usage of the VR technology, but instead the majority of them were focused in the real estate industry. With this system, agents are able to virtually show a house to prospective buyers, or show how a finished house will look after construction. While this was an interesting application of virtual reality technology, we really expected more disruptive VR-based solutions.

One particularly intriguing part of the event was Startup Battlefield, a breakout competition that includes some of the top companies in the industry. Participants sign up to compete, and the top 25 are chosen to meet on stage at Disrupt where judges decide who will leave with the coveted Disrupt Cup and $50,000 prize.

TechCrunch noted that this competition includes “the crème de la crème” of the startup sector, showcasing the most innovative and promising products and ideas.

This year’s Startup Battlefield included two organizations that struck us as having particular potential. One such startup is Ava, which presented patented technology for a multi-sensor bracelet for women that helps wearers predict periods of heightened fertility with convenience and precision.

This medical device not only illustrates how technology can be beneficial for the health care field, but also incorporates increasingly popular wearable tech. 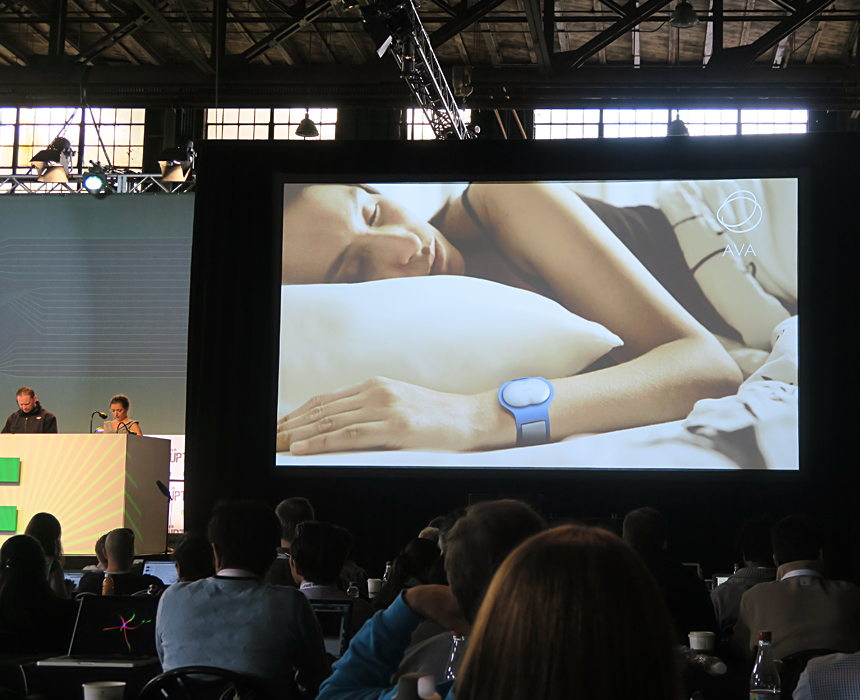 Another promising startup included in the Battlefield competition was Green Bits, a provider of point-of-sales software particularly for marijuana producers, processors and retailers. Following the end of cannabis prohibition in Washington and Colorado in 2012, the founders of Green Bits noticed a need for solutions that would help these businesses continue to grow while remaining within the legal limits of the new laws. Green Bits’ POS software aims to do just that. This company represents just one in this expanding sector. It’s pretty clear that startups see considerable potential in the marjiuana marketplace.

While Green Bits was a runner up in the competition, the winning distinction went to Agrilyst, an organization that I predicted would come out on top. The company aims to help greenhouse and farm operators run their facilities with increased efficiency through the analysis of data from greenhouse sensors. Startups that are eco-friendly or the ones that help the community have a tendency to win in this kind of competition.

Women in Tech: A focus on diversity

“Three women and three different perspectives – and a reminder that as we continue the diversity in tech conversation, we can do so while holding multiple ideas in our brains at the same time,” The Next Web contributor Lauren Hockenson wrote, reporting on the event. “No one viewpoint will ever accurately crystallize why we need diversity in tech or how we can solve it – it’s a malleable issue that begs for multiple solutions.”

The panel was very enlightening, particularly because the women participating are at vastly different junctures in their careers. These women shared significant insights about diversity in the tech sector, including hope that diversity will continue to increase into the future.

Overall, I very much enjoyed my time at Disrupt 2015. The event offered a number of interesting presentations by innovative startups, and Making Sense was happy to be a part of this year’s gathering.