On July 17-18 of 2013 a large number of C-suite executives and Senior decision-makers from enterprise companies with $1B or more in revenue and interested in evaluating global sourcing opportunities arrived at New York City to participate in the World BPO/ITO Forum. Among the many Senior executives who attended this event was Making Sense‘s CEO Cesar DOnofrio together with Nancy Medica, Making Sense’s Marketing Manager and Representative to the New United States ArgenTIna IT Office and our VP Business Development Robert Matthews.

All of the 2013 attendees were able to participate in a large amount of conferences where diverse speakers offered inspiration while sharing strategies for success. The theme for this year’s program was “Smartsourcing: Leveraging Collaboration & Innovation” focused on achieving optimal return on objectives from a multi-vendor, geographically-diverse ecosystem.

As active members of the Chamber of Software and IT Services Companies of Argentina (CESSI) Cesar DOnofrio together with Nancy Medica have been eagerly working in partnership with the Argentine Ministry of External Relations and Culture (Ministerio de Relaciones Exteriores y Culto) to launch the ArgenTIna IT International Network that promotes the Argentine software and IT services companies in the major markets around the globe.

Various other members of Making Sense who were also present at the forum shared with attendees a great deal of experience about the many successful projects completed as a Nearshore Outsourcing partner, and also provided valuable information about the ArgenTIna IT international Network in a unique “Buenos Aires style” booth.

Some of the activities that took place at the Argentina booth at the forum included games with large-screens tablets where participants were asked to build Argentinean landscapes and received traditional Argentinean candies and wines as winning prices.

Throughout the rest of the forum executives like Juan Navarro, primary board member at CESSI together with other business leaders gave conferences and received lots of inspiration sitting through sessions of different speeches, panel discussions and debates centered on leveraging collaboration & innovation through smart sourcing.

In order to announce the launching of the ArgenTIna IT international Network and to discuss how Argentina has emerged as a favorable destination for Information Technology, Business Process Outsourcing and captive operations Cesar DOnofrio and Nancy Medica were also invited to a cocktail conference at the Argentine Consulate in New York City. 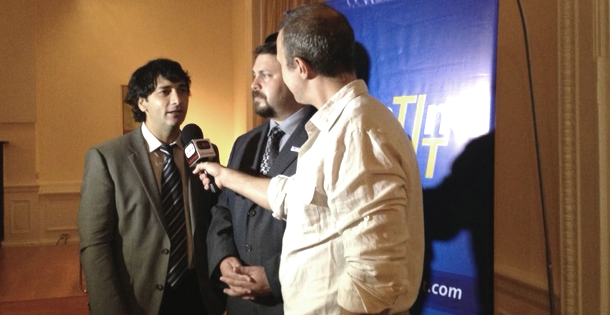 While there, Cesar DOnofrio, who delivered a speech focused on Argentina’s immigration and high education standards, explained that one of the main reasons to choose Argentina as an outsourcing partner was due to the excellent education Argentinean Engineers receive from public universities throughout the country.

“My generation has a strong work ethic because this was an example modeled to us by our parents and grandparents. This paired with Argentina’s investment in our education system has allowed Argentina to graduate innovative and creative engineers. Many of  these young engineers today are part of my company as well as many of the other companies represented here today” said Cesar.

Argentina has a rich international business heritage and a reputation for being the leading “European” country in South America. This cultural affinities and natural timezone alignments are going to be important factors when considering outsourcing  jobs to other countries. It is also not by coincidence that Cesar concluded his speech by stating “My story is a similar one to many citizens in the United States whose parents were also immigrants. Because of our roots, we have an equally strong work ethic, and also our western cultural similarities will allow us to work together efficiently and easily.”

Introducing ArgenTIna IT at the Argentine Embassy in Washington 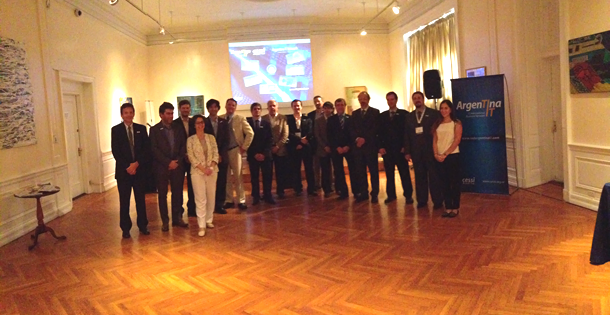 In the last few years Latin American governments have worked really hard to leverage their Nearshore advantage by offering different incentives and improve the business environment. With regards to Argentina specifically, the country technology sector has grown considerably by directly positioning itself as a regional innovator and leader in the software industry for all of Latin America.

As many of you know Making Sense is an IT company strongly committed to raise market awareness of the Argentine software sector as a favorable outsourcing destination. During the last seven years the company has been working with nonprofit organizations that bring together IT companies dedicated to the production, development, commercialization and implementation of Argentine Software worldwide.

This past July 19th and after attending the BPO/ITO Forum, Cesar DOnofrio and Nancy Medica visited the Argentine Embassy in Washington DC to attend an international meeting aimed at promoting the exportation of the Argentine technology sector with the goal of achieving optimal results on future projects.

Some of the events that will be taking place in upcoming months and where Making Sense will be representing Argentina include the 2013 Gartner CIO Leadership Forum where senior executives from leading technology providers will exchange experiences and ideas, and the participation of the company in the 2014 SXSW Interactive.

Among other future projects discussed in the meeting was the possibility to eventually opening even more new ArgenTIna IT offices in San Francisco and New York in the United States. An announcement also came that Ambassador Nahón would commit to being present in the official grand opening of the ArgenTIna IT office that would take place in March of next year in Austin, Texas.

Finally, Cesar and Nancy proposed an ambitious “Argentina Trade Mission” that would involve the visit of various decision makers from some of the United States’s major tech companies to Argentina. These future conferences and meetings to be announced may possibly take place in the prestigious “Palacio San Martin,” a beautiful palace in the Retiro neighborhood of Buenos Aires, currently serving today as the Ceremonial Headquarters for the Ministry of Foreign Relations. This mission would also give executives the possibility to join a Startup Crawl stopping by some of the best Argentine companies in Buenos Aires.

As a software development company with a team of highly motivated professionals Making Sense continues assisting companies to provide the best services to their clients in today’s competitive market. If you would like to learn more about how our company can help you develop a new product at a reasonable price and with unlimited scalability please contact us at hello@makingsense.com. Also, for news and updates on Making Sense future projects don’t forget to visit Making Sense’s blog where you will find continuing information about our projects and services.