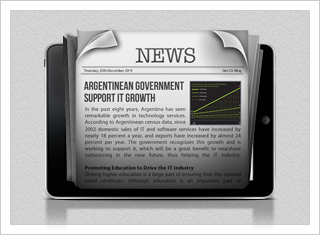 In the past eight years, Argentina has seen remarkable growth in technology services. According to Argentinean census data, since 2002 domestic sales of IT and software services have increased by nearly 18 percent a year, and exports have increased by almost 24 percent per year. The government recognizes this growth and is working to support it, which will be a great benefit to nearshore outsourcing in the near future.

Promoting Education to Drive the IT Industry

Driving higher education is a large part of ensuring that this upward trend continues. Although education is an important part of Argentinean career paths, a surprising number of college students never finish their degrees because many students enter the workforce before completing their course studies. Despite the fact that these students still gain the necessary work experience, the lack of a degree is detrimental to Argentina because it pushes down graduation rates for the country overall.

To turn that trend around, Argentina’s government has started offering scholarships and tax incentives to students so that they complete their graduate degrees instead of entering the workforce early. The University of Buenos Aires allows undergraduates to complete their degrees free of charge, but they do require tuition fees for the graduate level; so the government’s help will go a long way towards helping poorer students. In the long run, it will increase Argentina’s graduation rates, as well as bolster their workforce with more professional-level graduates, many of whom will go on to work in the tech field.

Incentives are also being offered to businesses in order to support this budding IT industry. In 2004, two pieces of legislation were introduced at the federal level to promote the design, creation, development, and implementation of software systems by offering tax exemptions and fiscal credit for federal taxes to companies that specialize in software services. This will allow technology companies to develop faster, thus helping the IT industry to better establish itself in Argentina.

As a result of the Argentinean government’s efforts to improve graduation rates, outsourcing to Argentina will become even more beneficial to software companies than it is already. Staff on outsourced teams will be even better educated, and more companies will offer nearshore outsourcing opportunities for American software developers. After all, the better the tech industry is in an outsourced country, the better the software that they’ll produce.