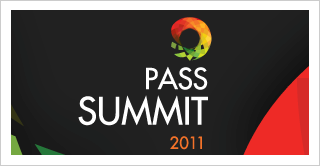 During the week of October 10th-14th the 2011 PASS Summit took place in Seattle, Washington at the Washington State Convention & Trade Center. PASS stands for the Professional Association for SQL Server, which is an independent, not-for-profit association whose purpose is to support, educate, and promote the Microsoft SQL Server community. It provides an opportunity for users of Microsoft’s SQL Server to learn about the latest SQL Server developments, see product demonstrations and network with other database professionals. The summit drew more than 5000 participants.

Microsoft made a number of exciting announcements during the summit:

SQL Server 2012, formally known as “Denali”, will be released in the first half of 2012. This new release will offer significant enhancements for customers requiring mission-critical applications and business intelligence solutions. It will provide interoperability with SQL Azure to assist customers in acquiring the greatest scalability, performance and flexibility for mission-critical operations running either in the public or private cloud.

A backup capability will be included in SQL Server 2012 which will enable customers to easily back up their SQL Server databases directly to the Windows Azure platform.

Integration of Apache Hadoop in Windows Server and Windows Azure represents one of the new investments that Microsoft is making which will enable customers to manage huge amounts of data. Hadoop is a framework that allows for the scalable distributed processing of large data sets across clusters of computers using a simple programming model. This union of the power of the cloud with the power of data will produce results that were not possible just a few years ago. It will allow the use of leading business intelligence tool such as Microsoft PowerPivot. Microsoft will release a Community Technology Preview (CTP) of the Hadoop-based service for Windows Azure by the end of 2011. A CTP of the Hadoop-based service for Windows Server will be available in 2012.

Hortonworks, the company behind Hadoop, has made available the final versions of the Hadoop Connectors for SQL Server and Parallel Data Warehouse. Customers can use these to integrate Hadoop with their existing SQL Server environments to better manage data across all types and forms.

SQL Azure Reporting is a new feature that will enable developers to use familiar tools to create and set up operational reports in the cloud. These reports can be easily embedded in an application or browser.

SQL Azure Federation, the capability to allow developers to build scale-out applications across multiple databases along with an increase in SQL Azure database size to 150 gigabytes will be included in the next SQL Azure Service Release due out by the end of 2011.

Power View, a business intelligent tool formerly known as “Crescent,” will provide users with an interactive, touch-based experience with data from virtually any location. It will be available by the end of 2012.

Also demonstrated was a prototype of the Data Explorer, which provides a way for customers to gain competitive advantages by easily discovering, enriching and sharing data. Its full potential is reached when used along with the Windows Azure MarketPlace.

Microsoft urges it customers to test these new and forth coming Community Technology Previews as they become available and to share their feedback on these new features.