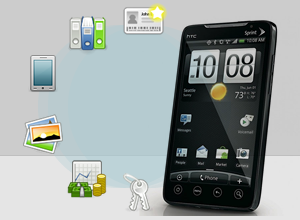 What is Near Field communication (NFC)? It is a set of wireless technologies for short-range (less than 4 inches), low-power (only 15 mA) communications protocol between two devices. Unlike RFID from which NFC has evolved, communication is two way but slower than Wi-Fi or Bluetooth. It can function like a built-in contactless payment card for a mobile device. And devices only need to touch to create a connection. One device, acting as the initiator, establishes a magnetic induction radio-wave field which the target device can sense and access without the need for any configuration.

NFC enabled devices will be able to handle three broad categories of:

The environment for the takeoff of NFC is now taking shape as specifications and device certifications have been finalized. Already NFC is compatible with existing RFID terminals which are supported by such companies as MasterCard and Visa. New NFC-powered point-of-sale devices are becoming available and NFC will be included in the next generation of smartphones.

With NFC devices mobile users will be able to:

Adversities and marketers will be able to collect real-time data about consumers’ preferences and purchases and be able to provide mobile consumers with product information, targeted ads and offers.

But as for security, NFC by itself does not ensure secure communications thus allowing the possibility for transmitted data could be captured by a third party. Yet, snatching data would be difficult since it would have to take place within the 4-inch transmission zone. At least, a device’s NFC capabilities could be turned off by the user when they are not in use. The NFC specification leaves the implementation of safeguards such as encryption or password protection to those who plan to make use of the technology.

The potential for NFC is huge by freeing us from the need to memorize passwords or to carry money, credit cards, tickets, keys and identification.