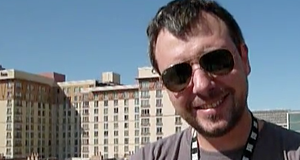 At SXSW we had a great time with the sessions as we mentioned in our overview post, and we also met great and interesting people. One of them was Daniel Undurraga, founder of Groupon Latinamerica. He created the start-up Needish in 2010 which four months later was acquired by Groupon, that serves more than 150 markets in North America and 100 markets in Europe, Asia and South America and has amassed 35 million registered users.

We talked with Daniel and asked him what are the difficulties for Latin America entrepeneurs when developing IT projects and why Latin American engineers have a cool and promising future.

Daniel explained that although in Latin America there’s no such same access to capital as US entrepeneurs have, things are changing and slowly there are more American venture funds investing in these projects. He also emphasized in the great engineers educational level the region has, which is always a pro when choosing a vendor.

Thanks Daniel for your time!