More often than not, front-end developers are responsible for integrating back-end programming with the client side for a user-friendly browser display, and they are also often tasked with structuring proper layout, polishing the interaction, follow semantic guidelines and UI design patterns and with UI/UX responsibilities in general.

This is the wrong approach, in my opinion. The question we need to be asking is “What’s the proper role of UI developers in this scenario?”.

By definition, both front-end and user interface developers work with the same client-side programming languages such as HTML, CSS and Javascript. The differences reside in how and where they apply their knowledge and what they have to achieve on the client side. 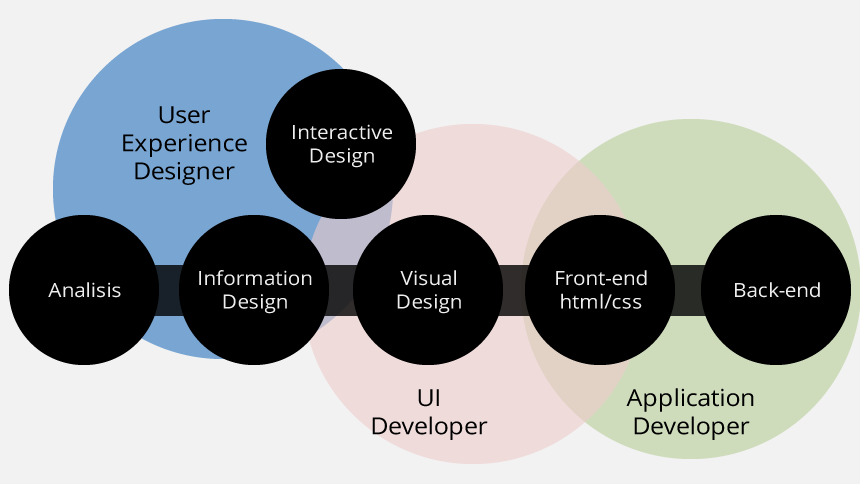 On the other hand, UI developers put their main focus on separating aesthetic and interaction elements and determining how each of these should interact with the information provided by the front-end engineering team: the granularity and modularity of every element and the overall look and feel is key.

UI developers tend to separate visual elements such as buttons, menus, galleries, message popups, etc.; they focus on user experience – how the user will interact with every element in the browser. From the beginning of a project, UI developers work closely with UI/UX designers, marketing managers, communications teams and product owners.

This is because they have to have a wider knowledge than front-end developers of what those teams are planning in the short, mid and long term and what to deliver to the user in terms of information architecture, business and communication strategies and user experience.

From a technical perspective, UI developers tend to work less with Javascript logic, and they pay more attention to layout semantics (well-structured layouts and SEO), visual interaction as well as look and feel.

From a project perspective, UI Developers “bridge the gap” between “behind the scenes” engineering and the artistry of the finished product; they have the aesthetic sensibilities of a designer combined with great technical client-side skills.

Innovation from an experienced team of software professionals on your side!

At Making Sense Software, we have a deep understanding of every aspect of the software development process, including front-end, back-end and user interface. We are driven to provide you with the best custom software, service and value possible. Not to mention giving your users a world-class user experience they will love!

Do you have a big idea for a “game changing” app or software program? Tell us about it. We’d love to help you bring your dream to life!