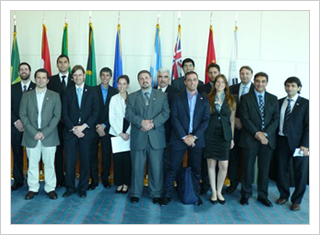 The growth of the Argentine technology sector has exploded over the last five years, a trend which tracks with the overall growth in technology service offerings and innovation coming out of Latin America.

Many U.S. companies have discovered the Argentine tech sector and have hired technology outsourcing providers, such as Making Sense and others.

But despite the growth in the number of Argentinean technology companies that have successfully entered the U.S., this is still a relatively unknown development in the broader U.S. business market.

DOnofrio conceived of the idea for a technology trade mission trip a year ago. He shared his idea with the Consul General of Argentina in Houston, Daniel Deodato, who then brought it up with the Ambassador of Argentina in Washington. The result was a trade mission that brought 12 mid-sized Argentinean software development companies, including Making Sense, to the U.S.

In September, DOnofrio saw his vision turned into reality. Representing his company Making Sense, he participated in the trade mission to three major U.S. cities, together with the other Argentinean firms, between September 17th and 21st. They met with some of the region’s top corporations, such as Exxon-Mobil, Chevron, DELL, Delta, and Turner Broadcasting.

The trip was organized by the Argentine Ministry of External Relations and Culture (Ministerio de Relaciones Exteriores y Culto), in partnership with the Chamber of Software and IT Services Companies of Argentina (CESSI) and Polo IT, a non-profit association of Buenos Aires-based software firms.

Although Making Sense already had a significant presence in the U.S., with a U.S. office in San Antonio and Austin, and several U.S. clients such as Dell, having the government of Argentina introduce you to the market has its benefits.

DOnofrio said: “It’s not the same thing if I make a cold call or one my sales guys compared to the government of Argentina making a sales call on our behalf.”

Three Hot Markets in the U.S. South and Southwest

The mission included visits to three major cities in the American South and Southwest: Houston and Austin, Texas, and Atlanta, Georgia. Each visit included tours of technology accelerators and incubators in Houston and Austin, and formal networking events with the Chambers of Commerce in each city.

At the Austin event, organized by Greater Austin Chamber of Commerce, the delegates were introduced to several Austin companies in the tech sector and other industries. At the Houston event, sponsored by the Chamber of Commerce event the turnout included Exxon-Mobil, Chevron and AT&T.

The event in Atlanta, sponsored by the Atlanta Chamber of Commerce, companies such as Turner Broadcasting, Southern Company and Coca-Cola arrived.

“Most of the people representing these companies were of very high caliber,” said DOnofrio. “For example, the person from Exxon, a fellow Argentinean, is the general manager of global procurement for Exxon.”

So was the trip a success?

DOnofrio said it absolutely was. They have already scheduled a pilot project with one large company, and there are several solid opportunities with others.

“The trip served the purpose of introducing us to companies we never could have met if we had tried on our own, but now that we’ve met them it’s our responsibility to close the deal.”

DOnofrio also hopes the trip in some way contributes to increased awareness of Argentina as a hot technology center, and a viable outsourcing destination for U.S. corporations.