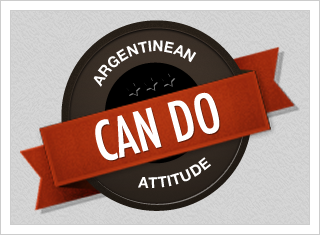 We’ve mentioned before that one of the benefits of outsourcing to Argentina is that there are cultural similarities between them and the States, which is part of what makes Argentineans so easy to work with. Another example of that is the way that Argentineans approach their work and life in general. Just as in America, they have a “can do” attitude that makes the work culture in Argentina similar to American work culture as well.

If you thought that MacGyver was creative in his solutions to problems, you should see some of the things that people in Argentina come up with to fix and replace things. For your amusement: a handy YouTube video illustrating the resourceful creativity of Argentineans. As you can see, they have an attitude of making things work with what they have available. In fact, they have a saying to that effect in Spanish: “Lo atamos con alambre.” It literally translates to “tying it with wire,” but has the idiomatic meaning of, “Make it work!”

Their distinctive creativity is not limited to everyday life. Argentineans in the software industry also pride themselves in coming up with creative solutions, which can only benefit your company as well if you’re outsourcing to Argentina. Since the country is composed of so many different cultures (much like America), they’re accustomed to approaching their work and thought processes in new and unique ways. Rather than restricting themselves to the way things are normally done, Argentineans will approach a problem from all angles and keep trying to crack it until it’s solved.

This is the very same attitude that sets apart successful people from those who fall short in American culture; and we definitely value that trait in people here just much as it’s valued in Argentina. Isn’t that one of the first things you ask potential hires, whether they’re a self-starter and can work well under pressure? This attitude also allows for a more linear way of working in a team, as opposed to hierarchal. In many other countries, workers are not encouraged to go to their supervisors with new ideas; but this kind of company culture is cultivated and sought after in America and Argentina alike.

Clearly, the Argentinean “can do” attitude is a huge benefit of nearshore outsourcing to this country, especially considering how important it is to American culture as well. It not only makes working with outsourced teams in Argentina easier, it also means that your projects still meet the same standards of quality expected in America, no matter how much money you’re saving in personnel costs by outsourcing.
the Email Awards 2011