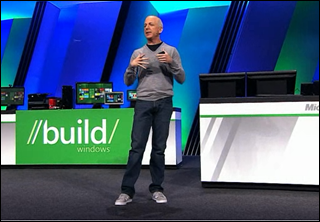 What a keynote presentation it was with more than three hours of demonstrations showing off the capabilities of Microsoft’s next generation operations system lead by Steve Sinofsky, President of Windows and Windows Live Division. Sinofsky explained how Windows 8 was a reimaging of the operating system with the goal of improving all the good things about windows 7 while expanding the platforms hardware base to include both x86 and ARM processors. It would allow developers to develop metro style apps, like those available on smart phones with new tools.

The improved user interfaces of Windows 8 will not consist of an extra layer sitting on top of the operating system. It is built into the system. But that’s not all. The operating system takes up less memory and has fewer processes. It can even boot up in seconds!

And there are many other feature we can look forward to in Windows 8 including:

For the developer, things just got easier. There are no restrictions on what language one must use to develop for Windows 8. Developers and choose the language they wish to use. Their applications will run on any implementation of Windows 8 (ARM or x86). They can use Visual Studio 11. It comes with templates for creating metro style apps. Developers can even use Visual Studio to write HTML/CSS /JavaScript Apps that can access Windows 8 native controls.

And there is a new Microsoft Windows Apps Store where developers can distribute not only Windows 8 applications but also Win86 apps. Microsoft will include the tools developers need to get their apps certified for distribution through the App Store.

The new hardware that will run Windows 8 is just beginning to be developed. It will include touch sensitive screens, built in sensors, new security capabilities and faster booting times.

Quality has been the focus with the development of Windows 8. Microsoft is expecting that once Windows 8 is released it will quickly develop a user base of some 400 million devices. Yes, Windows 8 is certainly shaping up to provide the best experience for users and developers alike. And the best news yet to come out of the conference is that Microsoft is providing the developer preview of the Windows 8, apps and tools to the public starting tonight at 8:00 PT at http://dev.windows.com free with no activation required.

Watch other keynote address from the Build Windows Conference live at this link.