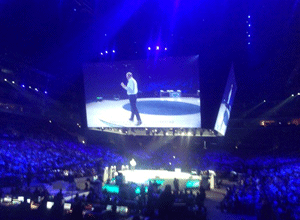 While delivering the keynote address at this year’s Microsoft Worldwide Partners Conference Monday, Microsoft CEO Steve Ballmer proclaimed the success of the company’s efforts over the past year to lead partners to move into cloud based computing. Initially, partners viewed the inauguration of the public and private cloud with apprehension because of the perceptions that the move to the new technology would create disruptions. Yet, firmly believing the cloud was the direction future, Ballmer had fully committed Microsoft to moving to the cloud. And many partners followed. As a result the transition to the cloud has been going strong with 41,000 cloud partners participating and bringing the benefits of cloud technology to the entire planet.

Later in his address Ballmer noted that the advances made on the Windows Azure Platform in functionality and capability over the last 12 months has given customers flexibility and simplicity in mixing public and private cloud applications or porting applications from one environment to the other. These benefits are due to a common infrastructure and common set of development tools plus the integration of other Microsoft products. He cited the example of Boeing’s application for marketing the company’s 737 aircraft that combines Windows Azure, Windows 7 and Windows Phone for displaying images and pictures in any device creating for the user the experience of seeing the plane. Ballmer also noted American Airlines’ Windows Phone app that provided instant real-time gate and baggage information through the Windows Azure Platform.