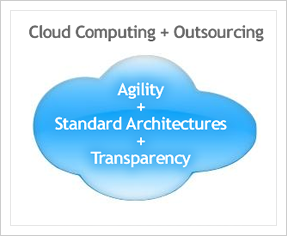 Cloud computing lets you keep a better eye on outsourced development, lets you more quickly correct issues that might arise, and gives you more security when taking ownership of the work, as the ReadWriteCloud blog stated in its interesting article.

At present, modest-sized firms create robust sites for some of the largest companies by using WordPress, Alfresco, and Drupal/Joomla/Zend combinations. Well, the same is happening with the development of Web apps. Every application is becoming a Web app, and almost every company can build or commission one.

If using a combination of cloud infrastructure and programming frameworks, a small team of developers can compete on the same or even higher level than a large team of enterprise consultants and developers.

There are three benefits of cloud development:

You can work faster and get more things done. And, if the development is outsourced, the agility of cloud systems can ramp up development of a project as well as identify if something is going off course.

If you wonder how much time it takes to build the structure and flow for a web app, the answer is weeks, or better, a few days. And, last but not least, data storage components can be brought online more quickly, and multiple copies or versions of test data can be cycled in and out.

There’s also a great way to rapidly iterate functions by using real-world data and adding or deleting features, which translates to a viable product for users sooner than usual!

With cloud systems, development is more serialized and the components are tightly configured. The application code, operating systems, Web and application tiers, and data storing and processing are coupled much more loosely. It only takes hours, or even minutes, to modify pieces and re-launch products. And because the elements launched are copies created on the fly, processes can be started and stopped at will with little setup or clean up.

Building and testing can also be done simultaneously, with several trials at the same time, and results can be viewed . . . the same day!

Cloud development offers a complete transparency with a more logically separated architecture in combination with a rapid-launch-teardown-restart mentality. It makes it easier to know where things are, localize and identify problem areas, and take over ownership.

Cloud development and programming frameworks influenced the fast acceptance of core design patterns. The application code and the system architecture will be recognizable to thousands of developers.

So by being agile, using standard architecture, and having quality transparency, cloud systems offer outsourcing services a great way to develop projects efficiently!