One of Common Sense’s internal projects, a useful and free iPhone application for the FIFA World Cup has been downloaded over 26,000 times in less than twenty days! iFixture 2010 is the best way to stay up to date on the FIFA World Cup Matches! (iTunes Link) iFixture is ranked as number 1 iPhone app in Argentina, Paraguay and Uruguay, even before the tournament started. It is also a popular app among diverse soccer fan countries worldwide, with either the Spanish or English language versions being in the top 10 downloads in many countries! 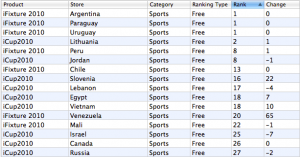 FIFA World Cup unites millions of followers all over the globe and this year this vibrant soccer celebration started on June 11th in South Africa. Common Sense’s iFixture app is a constantly updated dashboard to keep you tuned in with the latest matches, scores and rankings.
About the iFixture iPhone app:
iFixture users can get up to the minute data about the games and groups results, know who plays against who, keep the calendar updated and have the matches schedule adjusted to their own time zone.
Besides the sport facts, it is also a very good way of learning about the “other side” of the tournament by having available different information about teams, stadiums, cities and data about South African culture.
We’ve also developed the app’s English version: iCup2010, which is also available to download for free on iTunes.